skip to main | skip to sidebar

Russia vs Australia, a size comparison.

Well in case you were wondering just how large the Russian Federation is, here's a few juxtapositions to consider. 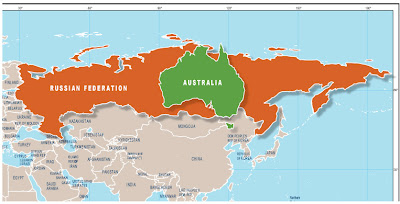 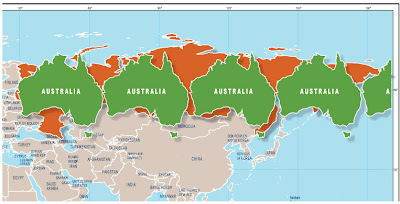 Posted by unreal adventure team at 11:16 AM 4 comments:

Viktor bought the first bike:
"I've taken everything apart down to last bolt, looks like there isn't much that can be salvaged. I been testing a 12-220 transformer and it is putting out .3 amps while draining the battery within minutes. You will have to charge your equipment while riding. My problem is to find a place where transformer wont overheat and wont shake itself to bits.

What do you want me to write on the side of the sidecar 'Australia to Magadan?'. Also what do you want on the rear fender, another tractor seat or a rack to cary equipment?" 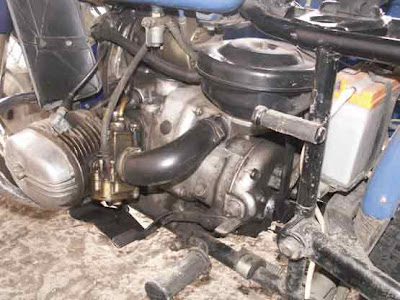 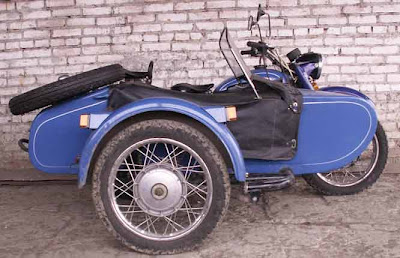 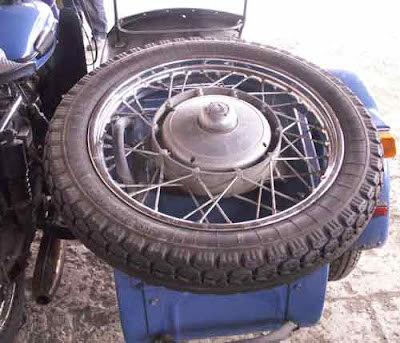 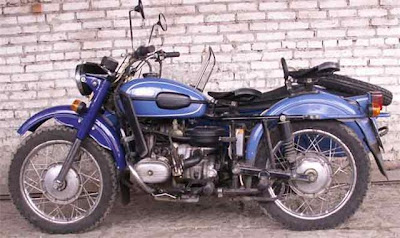 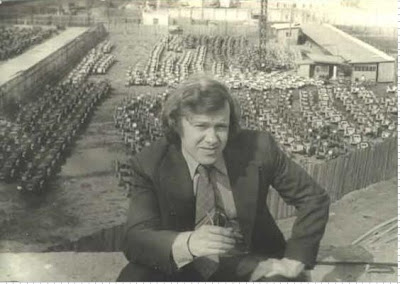 Last European trip we did, we were pretty naive. Truth is, if it wasn't for kindness of strangers we would not of gotten very far at all. In actual fact our gearbox broke early on in Estonia. But that's another story.

This time we're paying a custom bike builder by the name of Viktor to build our bikes for us. He is doing this at cost price all because he is a biker himself, he understand that were not some ritch film starts with unlimited budget and a total lack of imagination.

Viktor used to work for the IMZ factory in Irbit at the factory that makes Ural motorcycles. Back in the Soviet days he was a young talented engineer trying to improve the design of the Ural boxer engine. His passion was to develop water cooling for the ancient German design. Water cooling makes motors produce more power and last longer. But the soviet factory directors didn't like this idea, why bother spending money if there was no competition anyways.

Well I guess he got sick of that and left the factory, taking his prototypes with him. But the story does not end there, he went on to start his own company! He then developed a water cooling kit for the motor (this kit can be retrofitted to any Ural) but why stop there? He started building custom bikes for bikers all over Russia. He cleaned up at just about every bike show, winning countless awards. Now he sells his own accessories as well as complete bikes that have been improved in every way. How's that for an underdog story?

Go to his site have a look: http://www.kbmtc.ru/p7.htm
The site is a little clunky, but he probably made it himself!

Here's a photo of him at the IMZ factory, look at how many bikes are behind him. Now the factory makes bikes only to custom orders from USA, with a miserly turnaround of 2000 bikes per year (compared to 60,000 per year in Soviet days).


Kirill
Posted by unreal adventure team at 9:45 PM No comments:

Proposed map of the trip.

This is a rough plan for the trip. Estimated time 3 months. 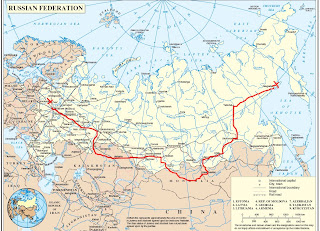 Posted by unreal adventure team at 3:36 PM No comments:

...And then there were three

This is where I crash the party and decide that I am coming along for the ride (literally). I had to settle for watching the last trip from back home in Australia, but not this time. This time I will be right there alongside my mates, sharing the fun (and not so fun) times.

It wasn't an easy decision to leave behind family, friends, and a job to travel to parts of the world that aren't your everyday destinations, but when a once in a lifetime opportunity comes up, you have to grab it and go wherever it takes you.

How it all began. 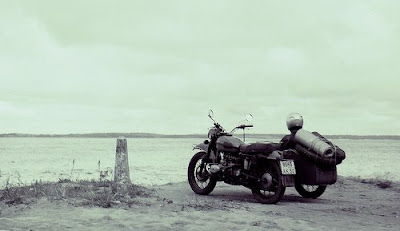 The foundations for this adventure begin in 2006, when me and my mate John decided to ride a motorcycle across Russia into Urkaine and do the Chernobyl reactor tour. In actual fact we ended up riding in complete opposite direction, for reasons that are no longer known.

We started in Moscow, managed to buy a bike (Ural with sidecar for $1500) and rode it to Finland, Estonia, Latvia, Lithuania, Kaliningrad, Poland, Germany, Netherlands, Belguim, France, Spain, Portugal and Switzerland. The trip took 4 months, and at the end we hated each other's guts. Sharing a bike and a tent will do that to mates! But at the end we realized that this was THE best way to travel and meet people, because there is no cage around you no barrier (car for instance). You interact with the world and in return the world interacts with you.

So this time we are more organised, more prepared, so theoreticaly we should be able to achive more....right? Lets see what happens.

Kirill
Posted by unreal adventure team at 2:44 PM No comments: